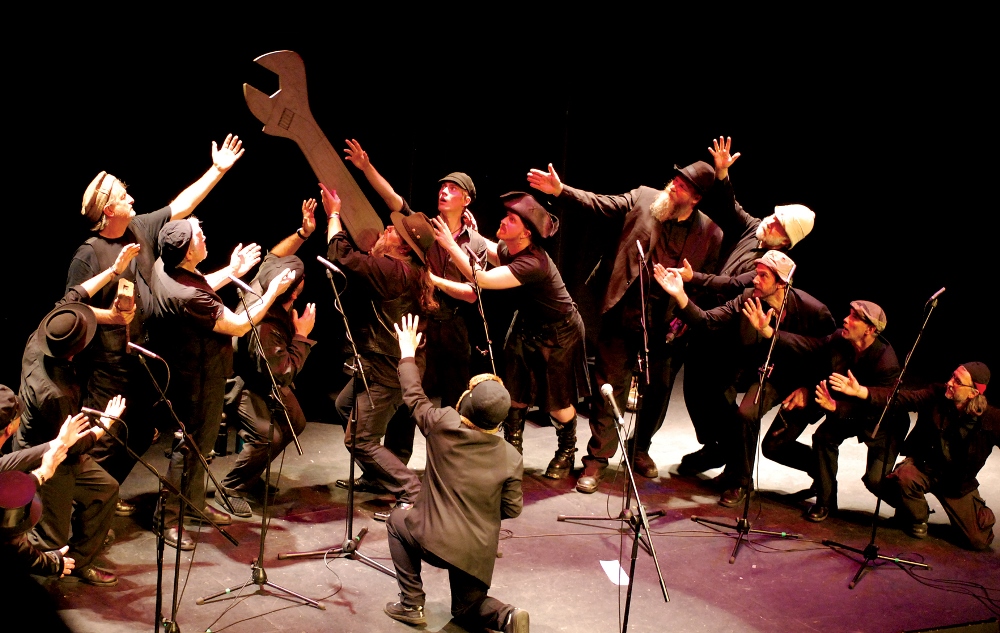 Men, singing songs. Some of them are funny.

The Spooky Men’s Chorale is a vast, rumbling, steam powered and black clad vocal behemoth, seemingly accidentally capable of rendering audiences moist eyed with mute appreciation or haplessly gurgling with merriment. Based on the twin pillars of grand foolishness and the quest for the perfect subwoofer-rattling boofchord, the Spooky Men seek to commentate on the absurdity and grandeur of the modern male armed only with their voices, a sly collection of hats and facial hair, and a twinkle in the eye.

In live performance, the Spooky Men draw on a combination of musical and theatrical values that are elusive and multifarious. Notable themes and antecedents include Georgian male polyphony, a running joke on man as a vast, oblivious useless object, whispers of clown, bouffon and Monty Python, and forays into massively pleasurable grunting tribalism. The audience are invited to first joyously endure a wall of mansound, then laugh stupidly, then venture into areas of great tenderness. It is ideally not so much comedic as hilarious, not so much shimmeringly perfect as pleasingly and deeply human

Formed in the Blue Mountains in 2001 by Christchurch-born ‘spookmeister’ Stephen Taberner, the Spooky Men  rose to prominence at the 2004 National Folk Festival in Canberra. Their 500+ gigs since have included WOMAD, The Great Escape Festival, the Woodford, Cobargo, Port Fairy, Blue Mountains and Bellingen festivals. They’ve appeared on Spicks and Specks, The Mix and The New Inventors, performed live on ABC radio many times and have earned great international acclaim on six UK tours and at major festivals including Edinburgh Fringe, Cambridge and Tonder (Denmark).

With six albums under their belt, they’re more masters of their territory than ever before. “We’re all ordinary men, inspired by the musical values and pointless grandeur of the Georgian vocal tradition, says Taberner, who sees the concerts as “a wonderful chance to experience powerful, tender a cappella singing, and to chortle uncontrollably, in fine regional concert venues.”

“Highly theatrical, they veer from weird to touching and back again. Grown-up entertainment in the best, most infantile way. Don’t miss an opportunity to see them” – Daily Telegraph